The Atlas of Worlds is the end-game map system in Path of Exile. The Atlas, in its most simple form, is a series of maps that are linked which you can progress through after completing a quest for Officer Kirac. Let’s have a look at it! 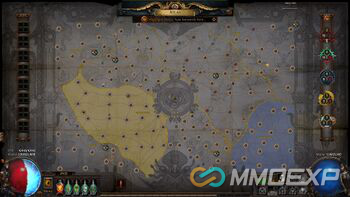 The Atlas of Worlds can be seen as a visualization of the dream worlds in Path of Exile. Players start at one of the four maps to start in the centre of the Atlas. These maps, called tier 1 maps, start dropping on Act 8. Players can find new maps in adjacent maps in the Atlas. As you may have seen, the Atlas is split into 8 regions, each which affect a Watch stone or Conqueror’s area of influence. Map drops are not random, but instead specific tiers are selected first, and the maps are chosen from a specific pool of them for the tier that the player is currently in.

For every map that you complete under certain conditions, you can gain an Atlas completion bonus. Each bonus adds a 1% chance for maps to drop that are a tier higher, with 100% chance of automatically upgrading the tier of the map that is dropped.

Every time you manage to complete a map, there’s always a chance to receive a special Atlas mission for a random master. You can use these Atlas Missions to guarantee yourself a master to spawn for your next non-unique map. These Atlas Missions are tracked for each set of the map tier colours, which are: white, yellow and red, where you’ll end up receiving the same tier colour of the map you received it in. Once per day, you can receive an Atlas mission for each master, relative to the last map you just did. These refresh at midnight UTC time.

Atlas progression can be considered in two stages: Pre-Awakener fight and Post-Awakener fight. The Awakener fight will first be available when you obtain 20 Wachstones and complete the questline for each Conquerors. During that time, you can keep upgrading the Atlas to obtain Watch Stones which allow you to reach the required region level for another Conqueror to spawn. Post-Awakener, which is after the questline is completed and the Conquerors begin spawning, you can obtain the remaining 12 Wach Stones from whichever regions you still have unobtained Wach Stones from.

When a random Conqueror encounter is triggered, the game will spawn the Conqueror in which you have not gained its respective Watchstone for that region from. Only one set is Watchstones can be obtained from any region in the Atlas, and each Conqueror can only make an impact on one region per cycle. We’ll now give you a few examples where a Watch Stone would fail to drop after killing a Conqueror, just so you know what to look out for:

- If a Conqueror encounter is triggered at the region where the Watchstones are all already obtained.

- If one region has the yellow and blue Watchstones obtained, and additional one only the yellow one, otherwise no influences on the Atlas. After triggered a Conqueror encounter in the former region, you’ll end up getting yellow influence instead of blue, which makes it so you can’t spawn the right Conqueror in the second region. Therefore, it’s more optimal to trigger a Conqueror encounter in the latter region, which allows you to force yellow influence, leaving the first to pick the only remaining blue influence.

- If after resetting the cycle with an Awakener fight, and one blue Watchstone was already claimed from that region when you defeated the Conqueror no other blue influence is able to be triggered during that time. In regions where there’s an unobtained blue Watchstone, a different influence can be triggered. This makes it so only one Watchstone from each other can be obtained during each one of the cycles.

Therefore, it’s optimal to get Watchstones as quickly as possible, which includes not wasting any encounter-cycles, which you can do by following these steps: Prioritize running maps in regions that have the most unobtained Watchstones, then pay attention to how many Watchstones the regions Citadel requires to have socketed to spawn a Conqueror. Then only run maps that match the regions current map-tier in order for you to trigger the first encounter, after a region is influenced the lower tiers will suffice. For the Pre-Awakener, obtain the Watchstones equally from all the regions. Optimally, this means that by the time you encounter the first Awakener, after you obtain 20 Watchstones, four regions have 2 and four regions have 3 Watchstones that are obtained. For Post-Awakener, at the beginning of a cycle, after the Awakener fight, make sure you plan ahead for which Conqueror you can encounter, and if possible, make sure every Conqueror has a region to where the respective Watchstone can still be unobtained. Try to obtain 3 Watchstones from each region before you head out and go for the last one.

That summarizes our Atlas of the Worlds guide, see you in another guide! Buy POE currency safe here, make an order now, you will have a good time.