Modifiers can change various aspects of the entity that they are affecting in Path of Exile. Most commonly however, these apply to stats, but they can also affect buffs, and can even grant skills that can be found on monsters, items, strongboxes or areas. Modifiers are similar to an instance of change that is applied to an item, given its effect by its associated stats, buffs and skills. Let’s go through what you need to know about Modifiers!

As aforementioned, a modifier can apply statistics, buffs or skills to an entity, and can be used on items, strongboxes, monsters or areas. As not all statistics have a visible text, there can be modifiers that can grant effects that are not visible to you immediately. You can find these hidden texts through sources such as the wiki, which has a database of them. Modifier generation is gated behind some specific conditions, which determine if and how likely it is for a modifier to appear, such as:

- Mod domain, which determines the type of entity the modifier will appear as

- Mod level, which determines the minimum required level of the entity for the modifier to appear, such the item level, monster level and area level. For items, it raises the item’s level requirement to 80% of its value.

- Mod groups, which prevent other modifiers from the same family to be randomly generated via the same entity.

- Tags with weights, which can be used to continually restrict the types of modifiers that can appear, as well as setting the chance to be randomly applied.

If you specify a buff, the Modifier can include a value for that buff, but it is not randomized like the stats. If a skill is specified, that specified skill will be granted to a relevant entity. The modifier does not include values for that skill, except the level that they’re defined by. This can be found on items which grant skills, for example: The Whispering Ice.

Implicit modifiers spawn on entities before the addition or change of additional modifiers, such as when you change the rarity. On monsters, these implicit modifiers can turn out to be very common. On items, the visible implicit modifiers are most commonly found on rings, belts, quivers, amulets, most weapons, shields and specific body armour, like the Astral Plate, Assassin’s Garb, Occultist’s Vestment and Carnal Armour.

Enchantments are quite similar to implicit modifiers, but yet are granted to items by their specific means. Interestingly, enchantments have their own mod slot on items and thus do not use the implicit mod slot. Most items can have an enchantment on it, any level of rarity can be enchanted. However, mirrored and corrupted items cannot be enchanted, as they are always fixed values, and therefore Blessed Orbs don’t work on them. Applying an enchantment on an item that is already enchanted simply replaces the old enchantment with a new enchantment. 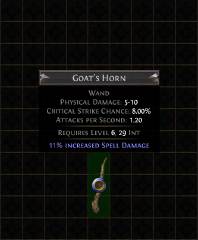 Explicit Modifiers are dynamic and generated by changing the rarity of an entity or similar modifications. The affix count is given by the rarity of the entity, for example: Magic has random modifiers based on their conditions, 0 to 1 for prefix and 0 to 1 for suffix, whereas rare has 1 to 3 for prefixes and 1 to 3 for suffixes (always at least 3), with the exception of jewels which are 1 to 2 for prefixes and 1 to 2 for suffixes. Unique is non-random, with fixed modifiers based on the unique entity. Monsters can have additional means of receiving modifiers by magic packs, Nemesis modifiers from rare monsters, Torment ‘Touch’ modifier from normal and magic monsters, Torment ‘Possession’ modifier from normal and magic monsters, picking up talisman to get a Talisman modifier, and rare beasts, found in Einhar missions and can have one or two Bestiary modifiers. You can change modifiers by spending your currency on: Divine orb, Orb of Scouring, Orb of Transmutation, Orb of Alchemy, Orb of Chance, Regal Orb and Ancient Orb, which all alter rarity of an item. Orb of Horizons and Harbinger’s Orb can give a newly created map of different modifiers. The Orb of Alteration and Chaos Orb can be used to re-roll modifiers on Magic and Rare items respectively. The Orb of Augmentation and Exalted Orb can be used to add random modifiers to Magic and Rare items respectively. The Vaal Orb can change the rarity or create maps with 8 modifiers, and the Orb of Annulment can remove a random modifier from an item.

Modifiers require conditions to determine how they appear, let’s go through a few of those conditions.

The mod domain is primarily reverse engineered, and therefore its detailed information cannot be found in the game files.

The level of a relevant entity, such as the item level or monster level can impact the modifier. However, there are some cases where this is not occurring. In those cases, it’s usually when the mods that are directly given to other entities, like implicit modifiers including enchantments or monsters that have innate modifiers. The modifier level is a factor in calculating the level requirement of the item, as it is raising the level requirement up to 80% of the requirement of the mod (the requirement is rounded down to the nearest whole integer). This is the case for mods of unique items, as well as enchantments.

Modifier groups can have a single group associated with them, making it so only one modifier from the group can appear, such that all the modifiers are mutually exclusive. The system is used to group the types of modifiers together to prevent the same modifiers to appear on items. This system is referred to as the mod group.

And there you have it, our in-depth guide to Modifiers, we’ll see you in another guide! Also, you can buy cheap POE currency & POE items from us now, so fast and cheap, enjoy here.